This story starts with a good mule deer encounter from a week prior (click here to read).

The morning of September 14th brought with it a marginal wind for a treestand I hung the evening before. I decided to skip the treestand and do a ground hunt for the first 2-3 hours of daylight. I planned to scout for an alternate treestand site at mid-day if the wind direction didn’t improve. That morning, I saw 7 bucks including, (4) 1.5yr olds, (2) 2.5yr olds, and a 3.5yr old+ 8pt. I had a good idea based on their travel route and my map recon where they were bedding. I decided to walk 75 yards downwind of the suspected bedding area to investigate further.

I am super aggressive when it comes to my in season scouting, and I believe it is a big component of my success. When I get anywhere near suspected bedding (based on cyber scouting) my goal is to move at a pace somewhere between still hunting and a slow walk. I want to bust deer out of bedding areas, but my ultimate goal is to get eyes on them and see if a target animal is bedding in that area. Ideally, the deer feel like they busted before being in too much danger (as opposed to being ultra stealthy and busting them at super close ranges). Once I bust a buck worth targeting, I try and get all the details (wind direction, bed location, access route, kill tree, etc.) for my setup, quickly.

After moving through the entire bedding area, it was around 10:30 a.m. I stopped by my truck to crush some fluids and go scout for a new treestand location. I ended up walking for hours. In the course of my travels (7.5 miles of zig zagging), I busted another good bedding area. 4 or 5 whitetail bucks (two nice ones) and a few does busted out of this particular bedding area. I pinned the location on OnX Maps and checked the map. The bedding area made a lot of sense, an isolated area with almost bulletproof protection on the backside of the bedding area, a good line of sight out front, and the wind helped the deer scent danger as well. Just outside of the bedding area, I found two twisted up licking branches with some fresh pawing in the dirt below them (pic below).

It was getting too late in the day to relocate the treestand, so I headed back to the truck, killed some more fluids and headed for another ground pound near where I had the encounters with the big muley the previous weekend.

Around 5 p.m. a whitetail doe and fawn came into view. The forecast predicted the wind to be straight West at 5 p.m., switching to Northwest at 6 p.m. and then straight North by 7 p.m.

That’s right, the weatherman lied again! Clearly, the wind blew from the Southwest, almost directly into the suspected bedding area, (a straight South would have been the only worse case). Anyway, not long after coming into view, the does started snorting and ran off. At this point, I should also mention the cool and windy conditions from the previous day, which kept the mosquitoes away.

However, on this afternoon, the temperature approached almost 70 degrees, and a capricious wind blew 2-4 mph, if it blew at all. The mosquitoes absolutely murdered me. I would have done some unspeakable things for a can of Deep Woods OFF and/or a thermacell.

10 minutes later, the doe and fawn came back, and…surprise!!! They winded me and the whole snorting sound off started again.

“This is ridiculous,” I thought to myself. About 10 seconds and 30 mosquito bites later, I had enough and started bee-lining it for the treestand. If the wind switched to W/NW as predicted, my treestand setup would be golden for the rest of the evening hunt. I climbed into the treestand late, around 6 p.m. It felt a little ridiculous to move locations that late into the evening…but it also felt ridiculous to stay put and keep getting winded by the doe and donate another pint of blood to the mosquitoes.

About 10 minutes into the sit and I spotted a nice 10 pointer through some branches about 75 yards out. I’m pretty sure it’s the 10 point I saw in velvet the prior weekend. I’m also pretty sure its one of the two shooter bucks I busted earlier in the day on my scouting mission. My stand was only 300 yards from the bedding area from the morning. At first glance, it looks like a 130s class buck, which would be my #2 or #3 buck…I decided I probably can’t pass a deer of that caliber. Based on what I had seen the previous weekend, I was only interested in shooting the big 6×5 muley or this 10 pointer as a solid #2 option.

His body language looked a bit nervous, perhaps he caught just a tiny bit of my scent? He began working away from me. He didn’t bound off, but he didn’t walk off casually, he kind of did the big buck move where they sneak off,  hoping they don’t get noticed. At this point, my optimism that he would return had faded to just about zero.

A few minutes later, three does filtered in from the southwest (safe area based on the wind that was now consistently out of the NW). About 10 minutes later, I looked back in the direction (North) I last saw the 10 pointer, and a few does worked into about 50 yards from my treestand. I thought to myself if that buck held up just beyond my sight, there was a REALLY good chance he would come in now that the does were close, and it looked like the coast was clear. Not 10 minutes later, I see what is obviously a buck body moving through the leaves and branches to the north. I started ranging some distinct spots in the vegetation on what looked to be his travel path. I ranged two bright green spots of grass at 41 yards. When the buck comes into view, I glass it, yep, its the 10 point, and it looks like a really solid buck. I draw my bow a few seconds later, and the buck stops right on the two bright green spots of grass. I settle the 40 yard pin, level the bubble, squeeze, CRACK! The sound of a solid impact! The buck wheels 90-degrees and starts bulldozing, his back legs moving full speed, but he is on his “knees” on the front legs, plowing for a good 20 yards. He gets to his feet and makes it another 60-80 yards, stops, and through my binoculars I can tell he is looking rough. A minute…maybe two at most and he is down. I glass him for a solid 10-15 minutes as light starts to fade. No movement for 30 minutes and it’s now last light.

I gave my buddy Joel a call, and I tell him I’m 90% sure I double lunged the buck, but I am ALWAYS hesitant to celebrate until I have my hands on the antlers of a dead buck. After explaining the shot to Joel, he is pretty convinced it’s a done deal.

I climbed down from my treestand to start tracking, and I find blood not far from where the buck was standing. About 10-15 yards into the track job, and I find the first part of the broken arrow. It’s about 7″ of the fletching end and its covered in bubbles, good sign! Another 10 yards and I find the rest of the arrow. The blood trail is decent, but not amazing (Slick Trick Magnums 125gr). When I get to the edge of the opening where I lost sight of the buck, I find him about 10 yards later. The arrow entered in front of the front shoulder, and the exit was right next to the leg bone on the offside shoulder.

When I get a good look at the buck, there is a little ground shrinkage, but it’s still a really solid buck by my standards. The buck grossed 121 4/8″. It’s now my #3 whitetail and my #4 buck overall. I am pumped! 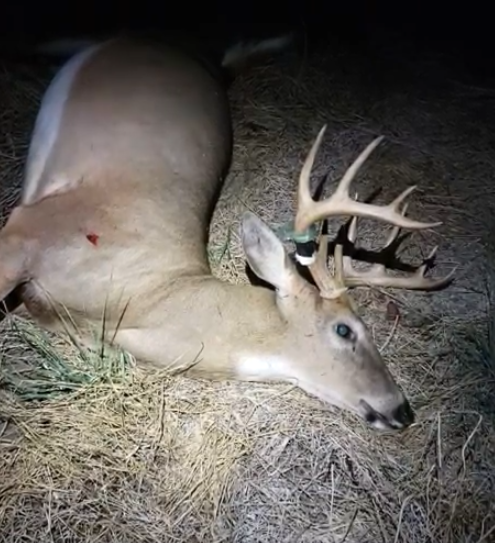 To close out the story on a bit of a comical note, while driving out of the public access road around 12:30 a.m., guess who crosses 40 yards in front of my truck? Yep, that’s right, the big 6×5 muley that I missed the previous weekend. Based on where he was at, he almost had to come from the area I abandoned due to the snorting does earlier that day. Oh well, live and learn!

Switching My Mindset by Ryan Anderson